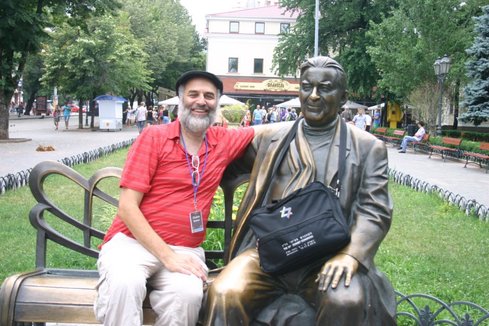 Ukraine, at the heart of the Pale of Settlement, was the home to hundreds of thousands of Jews less than a century ago. Here, in the Carpathian Mountains, the Baal Shem Tov wandered for weeks seeking closeness to God. His followers went on to establish the Hassidic movement. In Odessa, a city of rebels, young Jews came together and gave birth to the Zionist movement. In Kiev, young Ukrainian Jews are establishing new communities and are working to create a Jewish future in the Ukraine.

On this 7 day trip we will visit Odessa and learn about the roots of modern Zionism, Mezhbizh, birth place of the Baal Shem Tov, Uman – the burial place of Rebbi Nachman of Beslev, Berdichev – an important Jewish centre in the 19th and 20th centuries where the majority of the population was Jewish and the official language of the courts was Yiddish, and Kiev, the capital city of Ukraine. On the way we will visit many towns, villages and sthetls that were the heartland of Jewish life in Eastern Europe before the Second World War.

Wednesday 14 June:
Set off for Shtetl Tour. Visit Uman – the burial place of R. Nachman of Bratslav. Medzhvizh: The hometown of the Baal Shem Tov and the birthplace of Hasidism. Vinnitsa once a thriving Jewish centre, there is still an active Jewish community in Vinnitsa. (Overnight – Vinnitsa)

Thursday 15 June:
Visit Berdichev and Zhitomer – 2 large towns that had large Jewish populations and were once at the very centre of Jewish life in the Ukraine. Continue to Kiev and first introduction to the city. We will be staying the Podol neighbourhood, which was once the Jewish area of the city. (Overnight: Kiev)

Participants will book their own flights. The trip starts in Odessa on Monday 12 June in the late afternoon and finishes in Kiev on Sunday 18 June in the late afternoon.  There no directs flight from London to Odessa, but it is possible to fly to Odessa via Kiev, Vienna, Frankfurt and even Tel Aviv! There are several options for returning from Kiev, including direct flights.

The easiest flight combination is on Ukrainian Airlines.

The price includes hotel accommodation on a Bed and Breakfast basis, coaches, airport transfers in Ukraine, local guides, entrance fees to all sites, and Shabbat meals (Friday night and Shabbat lunch) in Kiev. Other meals are not included in the price. There are many restaurants available in Odessa and Kiev, including Kosher options.

Many people who have expressed an interest in extending their trip to visit places of personal interest. There is certainly possible. If you are interested in doing this let us know and we can put you in touch with local guides / drivers for your tour.

To reserve your place, you will need to pay a £75 deposit. The trip is subject to a minimum number of participants and to Standard Terms and Conditions.

This is a real 'going back to your roots' tour.  Based on our past experience it will be a very moving experience. I hope you will be able to join me.