Synagogue Group? Private Group? Searching for your Jewish heritage? Bar Mitzvah, wedding or other special occasion? Over the years we have visited many destinations. We are happy to prepare a bespoke trip to match your requirements. Here are some of the destinations we cover. Contact us today and let us know your requirements.

Troyes, France - In the Footsteps of Rashi

Troyes is a beautifully preserved medieval town in the Champaign region of France. Just walking through the streets of its timbered buildings is exciting. This is also the heart of the French wine industry, and we will visit a vineyard and learn about the important role of wine in the Jewish tradition.  This trip  introduces Rashi, considered the greatest commentator of all time, and his school of study. Become acquainted with Rashi’s commentaries on the Torah and the Talmud, and understand why he is so revered by Torah scholars to this day. Visit the home towns of his grandchildren and great-grandchildren, and try to understand why the names of these scholars are evoked everyday in contemporary halls of learning. 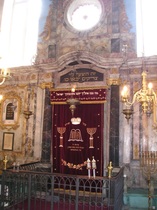 Provence was once home to a vibrant and creative Jewish community that has had lasting impact on Jewish culture. Today there is still a large Jewish presence in the area. Visits include the oldest synagogue in France in Carpentras, the the Papal palace in Avignon and the beautiful city of Arles. We will also spend Shabbat with the Jewish community of Aix-en-Provence and discover the Jewish roots of the city.

For Jews, Provence is a unique cultural area. With easy and open links with both the Jewish communities in the North of France and in Spain, it created a synthesis of the Ashkenzi and Sephardi Jewish cultures, and had a profound influence on both. You will learn about the contribution of the Provencal Rabbis to Jewish learning. The Spanish Jewish considered Maimonides to be the greatest Rabbi of all time – so why did they burn his books in Provence?  Find out about the unique contribution of Provence to Jewish culture.

Worms, Germany - A Journey to the Heart of Ashkenaz

Speyer, Worms and Mainz in the Rhineland region of Germany. This group of small towns is the heart of Ashkenaz — the place where Jewish life as many of us know it began. It was here that R. Gershom prohibited polygamy, where Rashi studied Torah and where R. Amnon of Mainz composed the haunting words of the U’Netana Tokef prayer that we still sing on Rosh Hashanah and Yom Kippur. Spend a weekend in these charming towns, and discover how our Jewish world came into being.

Florence, Sienna and Pisa house some of the world’s finest treasures, while the beautiful Tuscan countryside, the great climate and the Italian food and culture beckon. In the mountain village of Pitigliano we find many institutions of the Jewish community hidden underground in caves – perhaps reflecting the fear that many of the Jewish refugees from Spain felt as they re-established their homes in Italy. These are just a few of the mysteries to be uncovered on an Italian Jewish Journey.

Fez and Marrakech - A Moroccan Odessy

The beautiful city of FEZ, an important centre of Jewish learning, is one of the great Moroccan Imperial Cities with a colourful Medinah and old Jewish Mellah. After spending 2 days in the area of FEZ, we will drive through the stunning Atlas Mountains to MARRAKECH, to spend Shabbat with the local Jewish community and tour the delights of this city. Our study will concentrate on Maimonides (Rambam), and Rabbi Isaac Alfasi (literally – the one from Fez) –leading codifiers of Jewish law. Although Maimonides is widely known as a Spanish Rabbi, his family fled Spain in his childhood and his most creative years were spent in Fez.  We will meet the colourful and rich traditions of Moroccan Jewry, and join the community in Marrakech for Shabbat.

There will be many highlights. We will spend Shabbat with the local Jewish community, visit hilltop towns that sheltered hidden Jews, visit Portugal’s 2 main cities – Lisbon and Porto – and its only National Park – the Serra de Estrela. From the beautiful town of Castello De Vide to the world famous Gulbenkian Museum, you will not want to miss this trip.

Salonika has a long and rich Jewish history. It was one of the main ports that received Jews who were exiled from Spain and for many centuries the majority of its population was Jewish. The port of Salonika was even closed on Shabbat! It was known as the Jerusalem of the East.

Many important events in Jewish history took place in Salonika. It was here that Joseph Caro, intent on bringing the Messiah, stayed up a full night in study and prayer – thus creating the custom of Tikkun Leil Shavuot. It was here the Shabbtai Tzvi declared himself the Messiah, and led hundreds of followers astray. This is the home of Ladino culture and music.

Our trip will include a visit to the towns of Veria and Vergina in foothills of nearby Mount Olympus, home of the gods and birthplace of Alexander the Great. Here we will uncover some of the early encounters of Greek and Jewish culture. This meeting of cultures had a profound influence on the emerging Rabbinic tradition.

Vilnius and Beyond - Lithuania

In this trip we will visit the 2 main centres of Lithuanian Jewry – Vilna and Kovno. We will also visit the town of Trakai – home to a Karaite community - an ancient  Jewish sect which split from mainstream Judaism several centuries ago.  We will visit the sites, study the history and meet the local Jewish communities who are struggling to carry on the legacy of this great Jewish centre.

Girona - A City on the Border

Girona was the northern most Jewish community in Spain, and it sat on the cultural border between the Ashkenazi and Sephardic worlds. This is where Spanish and Ashkenazi Jews first met each other, with surprising results. Walk the narrows lanes of the old city where the Jewish quarter is preserved, visit the home of Ramban, walk the walls of the city, and open Girona’s secrets through its sites and literature.
©2010 Jewish Journeys | Registered address: 95 Windermere Avenue, London N3 3RD