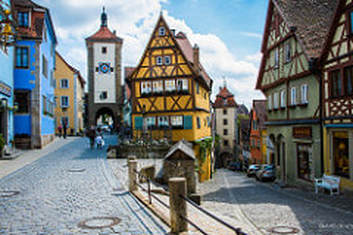 Central Europe was the birthplace of Ashkenazi Jewry. Here, along the main trading rivers Jewish communities were established and Jewish life flourished. Many aspects of the Jewish life we take for granted today were first established here as the result of the influence of surrounding communities. This 4-day (3 night) adventure takes us to the heart of Germany and many prominent medieval Jewish centres. We will visit Regensburg – home of R. Judah HaHasid the founder of Hasidut Ashkenaz, an early form of Jewish mysticism. We learn about R. Meir of Rothenburg - who spent 7 years in prison for refusing to agree to Jews being treated as a Duke's property and Bamberg – a World heritage city with one of the best-preserved old towns and which hosted one of the oldest Jewish communities in Germany. In Nuremburg we will concentrate on modern Jewish history in Hitler’s Nazi marching grounds and we will also visit the site of the Nuremburg War Crime Trials.

Day 2: (Friday)  Visit Rothenburg ob der Tauber, a beautiful market town and home of R. Meir of Rothenberg who had a huge impact on the Ashkenazi Jewish legal tradition, and then on to Regensburg.

Day 3: Shabbat programme in Regensburg, including walking tour in the Old Town. The theme for the day is Hasiday Ashkenaz – the Ashkenazi school of Jewish mysticism.

Day 4: (Sunday) Nuremberg. The Old Town. Nazi Marching grounds and the Place of Justice courthouse where the concept of basic Human rights was established. Transfer to Nuremberg Airport.

You will need to book your own flights to Nuremberg. There are direct flights from London by Ryanair, and indirect with several airlines. It is also possible to fly to Munich and transfer to Nuremberg. Details will be provided.

​The price includes hotel accommodation on a Bed and Breakfast basis, coaches, airport transfers in Germany, local guides, entrance fees to all sites, and Shabbat meals in Regensburg.

To reserve your place, you will need to pay a £75 deposit. The trip is subject to a minimum number of participants and to Standard Terms and Conditions.


Booking now Open!
To book - use the button below!